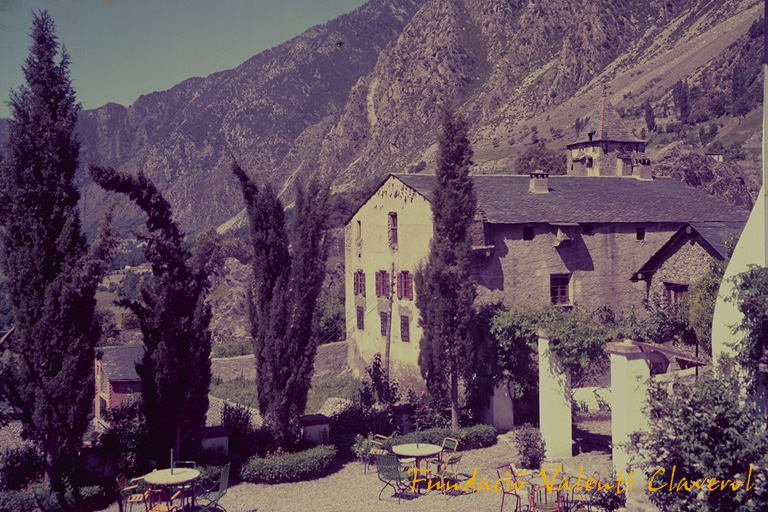 THE BIOGRAPHIES OF VALENTI CLAVEROL AND HIS FATHER JOSÉ CLAVEROL.

José Claverol Cirici was born on February 15th 1854. His father Valenti Claverol was a doctor in the Parish of Sant Julia de Loria, and his brother was also a doctor in Andorra La Vella. Not withstanding their respective professions, and never forgetting where they came from, they moved to La Seu D' Urgell (Spain) where they opened a fabric store.

José Claverol Cirici spent his youth among a rather economically prosperous family. He was orphaned at the age of 14; an uncle who was settled in Chile took him on. (The years in Chile were spent among the bourgeoisie) it is then that José discovered photography and he developed an interest that throughout his life would become a passion. Destiny again had José move back to La Seu d'Urgell when his sister became gravely ill. Because of this rather unexpected and prolonged stay, José met Concepcio Cirici I Mallol, who would later become his wife; through this encounter he re-found his roots that the long stay in Chile had made him forget.

José married Concepcio, four boys were borne of this union: Josep, Angel, Francesc and Valenti. Even though the family business was dedicated to fabric, José Claverol set up a photographical studio with plenty of natural daylight located at the Carrer Major in the Seu d'Urgell. There he took portraits of families, which keeping with the tastes of the times required backgrounds of heavy cloth, painted scenarios depicting the interior of a home, a garden, etc....

Unfortunately very few photographical documents of José Claverol remain. The Spanish Civil war, the many moves, and the fragility of the documents (glass negatives) did not bear well in the agitation and many upheavals of those times. José Claverol was a photographer and adhered to the formula that to take ''a good photograph'' one had to find a natural setting. Nature, urban backgrounds and portraits became the major focus for his work.

It is because of this that the Claverol Archives contain among them the first picture of the Consell General (General Counsel of Andorra).
In 1902, he took a photograph of the General Council with the assistance of Xampalna; a neighbour of Encamp who got the counsel to agree to being photographed (something that had never been done before). Some still say that the initial reluctance to being photographed was a fear of the flash of the camera and the noise it made.

Before his death on November 2nd 1921, José Claverol tried to pass on his passion of photography to his older son, Josep but it was the youngest child Valenti who decided to continue in his father's footsteps on the rather difficult task considering the difficult times throughout Spain.

Valenti Claverol Cirici was born in La Seu d'Urgell on November 24th 1902. Up to the age of 14 he remained in la Seu d'Urgell and he studied at the La Salle School. Upon the death of his mother he moved to Barcelona where he began to work in a fabric store following on the family's tradition. It was then that, by coincidence, Eastman Kodak took him on as member of staff. Eastman Kodak in those days was one of the first International companies in Europe to offer shares to its employees. This awoke in Valenti his photographical interest. Initially just wanting to earn a bit more money, on the weekends Valenti would take pictures principally among circles where there was no competition, such as the polo playing fields of Barcelona, or the first flights out of the Barcelona aerodrome.

During his stay in Barcelona he met Rosa Sesplugas Arrufat, whom he married in 1930. He decided much to the new Mrs Claverol's amazement to honeymoon in Andorra, where they eventually settled. As it was not the easiest of times, Valenti Claverol sold his stock in Eastman Kodak in order to make a new start in Andorra. He had finally fulfilled his dream of returning home. Valenti and Rosa settled in Andorra la Vella. Their general store located on the Benlloch Square became the place where you could get your newspapers (weather permitting) as well as souvenirs for the visiting tourist. It was the only place in all of Andorra where you could find Kodak products.

The Claverol's lived in the old part of Andorra La Vella in a house owned by the Molines family. Two children were borne of the marriage, Dolors and Josep Claverol. Josep is now dedicated to photography from a commercial aspect. When Valenti Claverol turned seventy he again became a share-holder in Eastman Kodak, when his son Josep bought him shares in the company as a Birthday present.

The archives, founded by Valenti Claverol, have become indispensable in the understanding of the development of Andorra. Between the years 1930 and 1970 he captured all the most memorable moments. Among the many pictures were the official acts of the Consell General (general council), the strikes at FHASA (Andorran electrical company) and in 1936 the arrival of the French Gendarmes and the Spanish Guardia Civil. The last death sentence ever read out in Andorra in 1943, and the application of the universal suffrage in 1933. Valenti Claverol also photographed the well-known painter Joaquim Mir during his many stays in Andorra.
Valenti Claverol commercialised a very large collection of postcards; thus allowing Andorra to become known as a tourist destination. Stamps of his many pictures were also created and issued by both the Spanish and French Post Offices in Andorra.
In 1975, Kodak Pathé through the auspices of its Director of Export Services, Mr Robert Van Laar, honoured Valenti Claverolfor fifty years of collaboration between Kodak and Valenti Claverol.

In 1998, Valenti Claverol was bestowed the Gold Picasso Medal from  the UNESCO for his contribtion to the history of the Principality of Andorra.

He still had not officially retired.

This web-site is dedicated to both